Northern Ireland is a beautiful place – rich with legend and stunning natural beauty. The Causeway Coastal route runs along the northern edge of the island hugging the shoreline. It’s a very impressive drive. We found it as amazing as the Great Ocean Drive in Australia. For Game of Thrones fans, it’s even more spectacular since you can visit several filming locations (we used to be in the fans category till the terrible last season!). Read on for details on the causeway coastal route itinerary.

Overview of the Causeway Coastal Route

The ~200 km long Causeway Coastal route is a designated route between Belfast and Londonderry with multiple scenic loop drives along the way. The route covers incredible landscapes and multiple places of historic interest. You can take 2-3 days to leisurely cover all the attractions on this route or if you are short on time (like we were) you can do most of the best parts in just 1 day following this causeway coastal route itinerary!

Summer, May to September would have the best weather to enjoy this drive. When we went in May we had a gorgeous sunny day with clouds coming and going and very few tourists.

How to get to the Causeway Coastal Route

The best way to do this drive is to head to Belfast and pick up a car. Belfast is Northern Ireland’s capital and has excellent transportation options.

Itinerary to drive the Causeway Coastal Route in 1 day

Below is our causeway coastal route itinerary, following it in the clockwise direction:

Continue reading for details about each place on the map above.

We started our day early and reached the car rental place SixT in Belfast at 7 am. However bad luck struck us – the car rental agency claimed that since we were from India they would need to check with their insurance companies before handing us a car! Even though we had a booking! When we tried to call them out on this, they showed us the fine print in their 15-page long rental contract that states that they are free to do so.

Extremely disappointed and annoyed, we headed to the airport hoping some car rentals were open this early. Thankfully, we found Enterprise open and within 15 minutes we had our car! Our plan was back on track and we started on following our causeway coastal route itinerary.

The first stop on our list was a 45-minute drive away and we reached the Dark Hedges around 9 am.

Parking: It’s not allowed to drive along the road with the Dark Hedges any longer. However, there is a parking area very close by. As you cross the Dark Hedges, there is a hotel called The Hedges Hotel on the opposite side. This hotel has a large, free car park for those wishing to visit the Dark Hedges.

About the Dark Hedges: The trees making up the Dark Hedges were planted in 1775 by the owners of the estate to serve as an impressive approach road. Now, more than 2 centuries later, the trees are one of the most photographed locations in Northern Ireland.

When we reached, there were just 2 other cars there and the road along the hedges was nearly deserted. We had a great time strolling along the imposing Beech trees. You may have to walk a little to find the best spot for photographs.

The Dark Hedges have featured in Game of Thrones and a few movies.

Our next stop on this causeway coastal route itinerary, The Giant’s Causeway was just a 25 minutes’ drive from the Dark Hedges. This is the most fascinating destination on this entire drive.

Parking: There is a large visitor centre with plenty of parking available.

Opening times: The visitor centre is open through the year from 9 am – 5/6/7 pm depending on the month. See the schedule here.

About the Giant’s Causeway: It is a huge area covered with interlocking basalt columns varying in height from floor level to so high that you’d need to climb up on several columns to reach the top. Looking at the columns it is hard to believe that they are a natural phenomenon and not produced in a factory!

There is also a very interesting legend behind the place. It claims that the columns are the result of a causeway once built by a giant! According to the legend (and you’ll get to see the short movie version of it in the visitor centre!), an Irish giant was challenged to a fight by a Scottish giant. The Irish giant built the causeway so he could meet his opponent. However, when he saw the Scottish giant, he got scared and hid – disguised as a baby in a cradle! When the Scottish giant saw this ‘baby’, he thought that that the father must be an even bigger giant! Clearly, these giants were only large in size and not really in brainpower! Scared, the Scottish giant fled, destroying the causeway behind him and the remains are those we see today.

Since we had arrived quite early in the day, there were very few tourists around. After we purchased our tickets, we spent some time at the visitor centre going through the exhibits which explain the geological phenomenon. We also got an audio guide to follow the short movie based on the legend of the Giant’s Causeway. After all this, we were itching to get close and see the real thing!

There is a shuttle bus that runs from the visitor centre down to the causeway which cost 1 GBP per way per person.

We decided to walk since it was a beautiful day, we could see the ocean, and it was a downhill walk! The views over the ocean were absolutely stunning and we spent a long time taking pictures before we even reached the causeway! It’s a spectacular walk.

As we got close to the causeway, we were blown away by how perfect the basalt columns were – as if man-made! We walked up and down a few of those columns and it was super fun! It’s also a great place for pictures. With the ocean on one side and a large hill on the other, it’s a very picturesque spot.

It’s also a very windy spot so make sure you have a jacket! And comfortable shoes since the surface is quite uneven.

We spent some time sitting on the columns and just marvelling at the amazing natural beauty. We were also trying to work out why a group of tourists was trying to line up to climb upon a slightly high column and have their pictures taken. 😛

We spent about 2 hours at the Giant’s Causeway and then made our way back. We took the shuttle bus up to the visitor centre this time.

Our next stop, the Carrick-a-Rede rope bridge was only 15 minutes away from the Giant’s Causeway.

Parking: Plenty of parking available, free of charge. The overflow parking lot which is downhill from the main lot is actually next to a beautiful cove. You can walk down for some amazing pictures.

Tickets: Tickets cost 9 GBP per adult. The bridge has a timed entry system and pre-booking is recommended. Buy your tickets online here. The car park is located about 1 km from the bridge so plan to reach ahead of your slot.

About Carrick-a-Rede Rope Bridge: This bridge links the tiny island of Carrickarede to the mainland and was built originally to serve fishermen, though now it’s primarily a tourist destination.

We had not pre-booked our tickets since we were not sure what time we would reach the bridge. There were tickets available when we got there. However, it didn’t look that amazing to us from the distance and we did not want to walk all the way just to see the bridge.

Instead, we found the stunning coastline right next to the overflow car park looked far more spectacular! So, we walked down from our car towards the rocks along the coast. It was picture perfect there and with very few people since everyone was at the bridge! We spent about an hour relaxing and taking pictures there.

Our next stop was Torr Head which you would not find on many lists but it’s an absolute must-visit. It’s located about 30 minutes from Carrick-a-Rede Rope Bridge. To reach this spot you leave the causeway coastal route and drive along some narrow, winding roads until you get to the cul-de-sac over which this hill is located. Google maps will take you to the exact spot if you follow the map above.

Parking: There is free parking available just below the hill

About Torr Head: This is a hill at the coast which is the closest point to Scotland, 13 miles away. There’s an abandoned 19th-century lookout at the top which was used to track ships.

We were a bit sceptical about this destination since it was not part of most lists that I had read but we decided to give it a go. And it turned out to be our favourite stop of the whole day!

It was nearly empty when we got there with just 1 other car there. It’s a bit of a climb up the hill but the views, even on the climb up are breath-taking. Take a look at the pictures below and decide for yourself!

It was super windy up at the hill or we would have spent hours there!

Drive along the Causeway Coastal route

We did not have any specific destination in mind after Torr Head so we drove along the coast back towards Belfast. The views all along the coast were absolutely stunning. We stopped at several spots in between to take pictures. There are a lot of parking areas on the road where you can stop and admire the view.

Other things to do

Have you driven on this route? What was your favourite stop? Let me know in the comments below.

Are you planning a trip to Northern Ireland? Let me know if you have any questions. Where to stay in Switzerland – the best places for every budget! Things to do in Lucerne – Switzerland’s most charming city! Planning a trip? Here are some of my go-to travel resources to make it more efficient for you, while staying within budget!

ACCOMMODATION – Booking.com is my favourite platform for hotel or apartment bookings. I love their map interface (I prefer to stay within walking distance of major attractions!) and they have an excellent customer service

FLIGHTS – I prefer to use Skyscanner to find the cheapest flights. I often use their monthly view of prices to decide my travel dates!

TOURS & ACTIVITIES – Get Your Guide is my go-to choice for fun tours and activities. They have a wide range of options and a great interface.

TRAVEL INSURANCE – Travel insurance is absolutely essential for all your international travels. I’ve been saved by it a few times when I fell sick while travelling and I swear by it since then! World Nomads is an excellent choice for travel insurance. 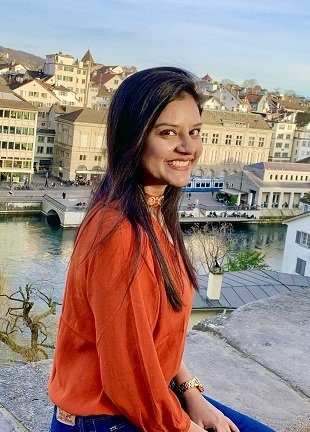 Gruezi, Hi! My name is Smita, a part-time traveller and a travel writer. So far I’ve been what you might call a serendipitous traveller! I got a chance to visit several amazing places more by chance than by design. I would love to put all my extensive travel planning to good use by sharing it with you and hope that these inspire you to visit all those famous, and not-so-famous locations! Read More

Connect with me on social media

Looking for advice on what to see in Switzerland or want to share your love for everything Swiss? Sign up for travel stories, updates on exciting new destinations and tools to make your travel planning easier!